Create an Account - Increase your productivity, customize your experience, and engage in information you care about.

The history of Springfield Township began in 1807. Settlers started flowing into Springfield the first year and it didn't stop until the vacant land was occupied. About 1875, a historian said that, "The broad lands, rich and fertile, the thousand homes adorned with the comforts and luxuries of an advanced civilization, vast resources of mineral wealth that abound, not only in this township but throughout this section of the country are among the memorials that attest the wisdom of their choice."

The inducements which invited the immigration of the pioneers of Springfield was all that the most exacting could demand, or that nature in her most pleasant mood could offer. Fine forests, streams of flowing water, productive land, and as afterwards discovered, vast stores of mineral wealth. Such advantages as these were not to be overlooked in the selection of homes.

Springfield Township, with its environs, is situated in the southeast corner of Summit County. With its southern extremity lying along the forty-first latitude it forms the south boundary of the old Western Reserve as surveyed by Seth Pease in 1797.

In the original Township survey by General Simon Perkins for the Connecticut Land Company in 1806 Springfield was set up as an equalizing township, as were the others in the reserve, and contained twenty-five square miles, five miles on each side. Springfield Township is unique in the fact that it has been part of three counties; originally part of Trumbull County, it became attached to Portage county and was maintained in this relation until the new county of Summit was established in 1840.

In this survey, he laid out a tract on Lot 12 for Ariel Bradley. Mr. Bradley was born in Salisbury, Connecticut in 1767 and pioneered to this vicinity in 1801. He settled in Mogadore and was soon followed by Thomas Hale, Ruben Tupper, Nathan Moore, Benjamin Baldwin and John, James, and Robert Hall who brought their families and began hewing homes out of the wilderness.

Life for the Pioneers

At this time Indians still wandered over Springfield Township and the Hall brothers were known to sleep in their cornfields to protect them from marauding Indians. On the advent of closer neighbors, they gave up this practice, but it was fear of Indians that led the hardy settlers to build a block house refuge on the James McKnight farm (Springfield Lake area).

There were no amenities to be had in the wilds of Springfield. The only food available was game. No corn, potatoes-not even salt. The settlers had to travel miles to get a pound or two of flour. The settlers sometimes obtained a bit of corn which they pounded into meal for bread. Their "mill" was a tree stump and a club, a crude mortar and pestle.

It was not uncommon to be attacked by wolf packs. One settler was surrounded by eight wolves. They were after his horse. He stayed up all night fighting them off with a club. One bold wolf was not scared off. This one attempted to grab the horse's throat and the frontiersman killed him with the club.

Formation of the Board of Trustees

In 1808 Springfield, along with Tallmadge, Suffield, and Randolph, was organized as a township and trustees were elected. It was at this time that Springfield was part of Portage County. The main road was from Canton to Middlebury (East Akron) and then finally a main route to Cleveland. Settlement was rapid and by 1830 the population was given as 1500 persons.

The earliest settlers were Pennsylvania Dutch and English from Pennsylvania and Connecticut respectively. Not all who came to Springfield Township stayed. Thomas Smith built himself a flat boat that he launched at Massillon. He navigated the Tuscarawas and Muskingum Rivers to the Ohio River and arrived safely at Natchez, Mississippi.

Mr. Ellet and his family came to Springfield. He had been a revolutionary soldier. John Weston, his neighbor, was considered well off because he had a wagon and a yoke of oxen.

In 1812, under old militia law, all men between the ages of 18 and 45 were compelled to drill on certain days of the year. Springfield Township was designated a military district and had a militia. Many of the militia were called to battle in the War of 1812 with England. Historian Gen. Bierce wrote "...all of the squad there mentioned have fought their last battle, and are now at rest." Hull's Ohio Volunteer Army surrendered to the British in Detroit.

Many of the retreating soldiers straggled through Springfield where they were sheltered, fed sweet corn and their wounds treated by Dr. DeWolfe who was virtually the only doctor in the western reserve but who performed heroically in administering to the needs of the sick and wounded.

After the surrender of Hull's Ohio Volunteer Army, a "press" was made for horses for the government. The press gang went to Reverend Beer's for his five horses. He said, "Don't take my horses. I'll lead you to a real good one," so they didn't take his horses. He led them through the woods to Mr. Hull's shanty. They started to take Hull's horse, but he got there just in time to save his property.

There were a great number of Indians in Greentown, but they and the settlers got along quite well. Within a decade, all of the Indians left and the "noble red man" passed to reservations beyond the "Great Father of Waters" - the Mississippi.

Springfield Township settled in small communities, each built around a center of interest.

Mogadore, the first of these settlements, was largely the result of the adjacent fire clay banks. At one time Mogadore produced thousands of crocks and tons of drain tile annually. It is still a leading producer of brick and clay products with branches of several large companies located within it.

Millheim (on the Krumroy-Myersville Road) was built around a mill and was made up of several hundred people, self sustained with their own church, school, stores, and blacksmith shop.

Ellet (or Springfield Center), boasted the first church building in the North Springfield Presbyterian Church built in 1809. The church organization has continued to function in later edifices. Ellet, long a business center, has seen the rise and fall of many stores and hotels, and other places of business. The first Springfield High School was located in Ellet (now known as Ritzman School).

Britain, or White's Grocery, as it was also called, long a gathering spot for traders and Saturday shoppers from the farm, was located at the intersection of E. Market Street and Massillon Road. Although it lost is identity, it became a busy spot during the latter half of the 20th century, with several rubber companies (Goodyear, General) and small manufacturing plants locating there. As the 20th century ends, however, Akron no longer is known as the Rubber Capital of the World and many businesses closed or moved to other states.

Pleasant Valley, in the southwest corner of the township (Arlington/Warner Road area), is a settlement well over the hundred year mark, and grew around another of the chain of mills, located along the Tuscarawas River, that meant so much to the lives of the early settlers. One of these mills was known as Shott's Mill.

Krumroy, the oldest of the new communities, got its name when Jacob Krumroy paid $100 to the Valley Railroad Company to name this station after him. William McChesney furnished the land and right of way for the new line.

The Springfield Lake District, most picturesque spot in the township and the exact geographical center of the original township, was left to much later development. Perhaps, because of its low swampy nature, the lack of industrial advantage as Mogadore, or a mill stream as Millheim, this section was reserved for purely residential or recreational purposes. During the rapid growth of the rubber industry in Akron, Springfield Lake became a resort area. Summer cottages were built, creating the Sawyerwood and Lakemore housing clustered around the lake. 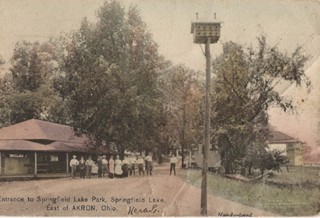 Springfield Lake Park (presently Springfield Lake Roller Rink ) was built in the early 1900s and consisted of many buildings that housed a merry-go-round, dodge-em cars, and various other amusement facilities. One of the main attractions was a roller coaster that extended out over the lake. The largest of the buildings was used for many different social functions, including dancing on Saturday nights and Sunday afternoons. Patrons danced to the music of big name bands such as Guy Lombardo and Vaughn Monroe.

In its heyday, Springfield Lake Park was the largest amusement park in the State of Ohio. Patrons came by street car from as far away as Youngstown, Cleveland, Canton, and Barberton. "At Springfield Lake they had interurban service. There was a side track that brought picnics in from Cleveland Canton-the trains would be loaded with people. We would see those interurbans come in and we knew that there was going to be a picnic that day" according to Lucille J. Gritzenger.

Many reasons have been given for the demise of the Springfield Lake Park-some point to the Depression and others point to an accident whereby the roller coaster left its tracks resulting in a number of deaths.